Béni's case as an example 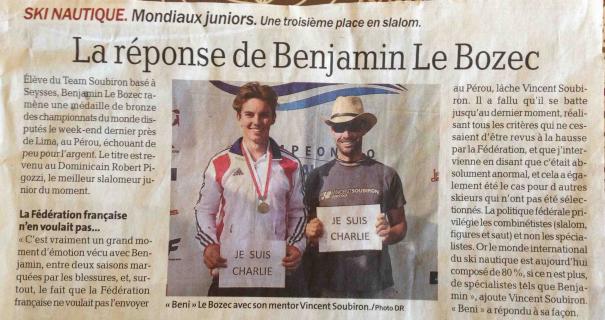 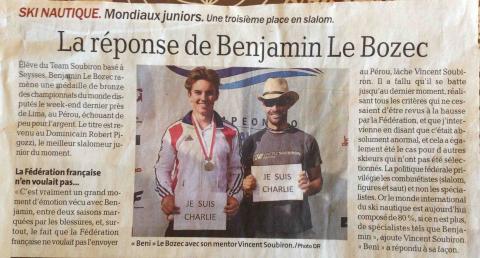 Benjamin Le Bozec, aka Béni, has been our team member for more than a decade and we are, as always, so proud of him. For some reasons that we never understood, as it depends on Federations' call, Béni never really had the chance to participate at many international events, such as the Europeans for example. Even though he didn't compete many of the kind, our Béni each time he got the chance to perform in a title tournament : he SCORED !

In U12 he won all the European Criteriums; in U14 he only got the chance to participate once at the Europeans (again he had the criterias to ski 2 Europeans but hasnt been selected..), he managed, probably to show that he was worth it, to win the Gold to be the 2011 U14 Slalom Junior European Champion in Ukraine. Well as a Junior Béni got only the chance to prove his ability at the Nationals that he won like numerous of them in the past, and then unfortunately he broke his foot in 2013 : season over a bit too early. Béni got back into the business in 2014 but sprained his weak ankle and foot, he decided not to ski the Nationals to heal it up, then made all the criterias to come back on time in August but still no selection for the Europeans ... :(   But Béni is not that kind of dude that will let himself down and stop fighting! He managed to perform better, fought a bit the selectors to have them put his name in for the Junior Worlds,  as he knew he'll give a shot for a medal ! which.... he did again...and took the Bronze at Jr Worlds in Peru in Slalom.

So there it is : Béni proved once again that you can count on him on the big event. He was not the best one on the papers, he was ranked #8 on the IWSF Ranking List, and the top 3 on that list were pretty solid dudes. But a title competition is a title competition. It s not always the best ones on the list that got to make the podium.

All that to say, the maximum of skiers that can get into a title competition, if they have the IWSF or EAME criterias of course, should be able to compete and to express themselves. That will encourage skiers to keep going and to bring new ones into our sport. Our sport is too confidential to afford not to send the maximum of skiers. We need skiers, because skiers bring parents also to get involved into the waterski life as officials, volunteers, ... It's incredible that nowadays some federation decide not to send their skiers, even though they are qualified, to title tournament. Or for no reasons they decide to only send Overall skiers ! how come when 3 skiers at out 4 in Open men are specialist ?! It seems those same people have failed to understand that there is many reasons why skiers are specialist and not that many Overall anymore. The main reason is money! the worlds ecomomy is in crisis and not everyone can afford to pay for an Overall training, equipment, competitions entry fees,... Also, kids are studying more and longer than 20 years ago, and when they done they go straight off to work to earn money! So let's encourage skiers to express themselves in the event they want, and support them for their choices. Is there only decathlonians that got to compete in Athletism? i don't think so.

Also some people are complaining because there is too many skiers sometimes at Europeans or Worlds in the youth category. Seriously ???? We should have even more if we want our sport to get more crediblity and expand. How many snowskiers are hitting the course on any given competitions week end during the winter ? This is how you get Elite athletes, you need to have a lot at the start. If you have a group of 10 at the beginning you are lucky if there is actually one remaining at the end. The more skiers that get to compete at younger age the better chances we have more for Open. The funniest is, it is usually the same persons that complain about too many skiers at some tournaments, that are also complaining about how bad the waterski industry is going bad...

Even though it was Junior Worlds and not Open ones, Béni's medal is also to prove how you have to keep fighting for your dreams no matter what the odds are. For not letting people to decide for you and shutting your doors. And once you have your medal around your neck your job is to promote your sport, to help the other skiers that were not fortunate enough to participate. You have to represent skiers and fight for the skiers rights. This is what champions are and how you make things moving. A medal is what you get for your achievement but it remains final if you don't use it after you got it around your neck. Use this medal as a voice, to tell your story, to motivate people, to do the right things. Share it and that medal will have even more value ! People will look up to you and they will be inspired.

People will try to discourage you, to frighten you up, maybe threaten you to not be selected for a National Team or to compete as an individual. But keep your focus in mind, follow the path you are made for, no matter what, until the day those people that did not seen the things with the right perspective at first, may finally understand that federations, officials, skiers have to work together to improve our sport and make it bigger. We all know that people are stronger united than individuals. We all love our sports, let's make it huge! There is no polemic in this article, just a wish for people to be conscious of what they are capable of doing, and to never forget that we are all here for the same reason : the love of our sport. And on that matter we have to do evrything possible to expand and promote it.

On a final note, we were so proud in Peru, to hold the "Je suis Charlie" sign for the Freedom of Speech. This freedom is so important, and unfortunately at different level people are kind of forgetting this. Speak relevant,be pertinent, build your argumentation for people to understand your feelings and the message you want to share, and then we will all get better.

As a coach, I am very proud of Béni that speaks out for the others to help them. He is sharing his medal.